In 2020, the outbreak of COVID-19 raged through the world, and foreign trade people had been depressed for a year!

We look forward to taking the high road in the year of ox with good fortune, viewing the palingenesis of the flower and seeing the cloud come to and fro in the sky.

In March, the exchange rate was good in sync with the weather and the temperature, walking toward the sun. It just improved a little, while the foreign traders did not smile.

On March 23, the Suez Canal, one of the world\'s major shipping lanes, suddenly blocked. A bunch of Indians piloting a American-owned ship rented from Japan by Taiwanese but with a Panamanian flag blocked the Suez Canal.

The Suez Canal was once inaccessible to navigation, which was a "cerebral thrombosis" of international commerce. If it was not done well, it would be fatal. 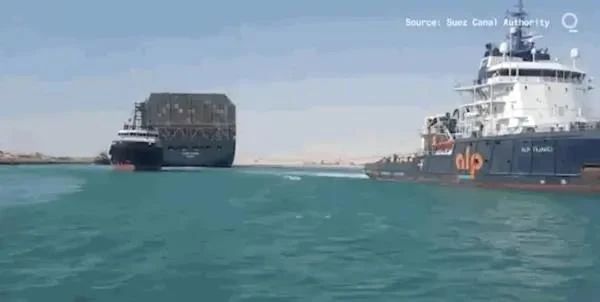 The chairman of the Suez Canal Authority had previously said that there are 422 vessels queuing up to pass through and that it could take three and a half days to evacuate them.

Fortunately, on March 29, the canal is through, but the heart of the freight forwarding foreign trade people blocked.

The stranded ship was rescued and the Suez Canal opened to traffic. However, the aftermath of this incident is fermenting. The logistics chain of the Asia-Europe route has been disrupted, causing the scarcity of containers to face a shortage again!

It is reported that the Suez Canal blockage after the chain effect will be concentrated in April. May be the world April day, foreign trade people live, not simple.Bitter or not, Asia-Europe route who call the shots? The joke spread on the network, you can just have a smile.Who is responsible for blocking the river? The captain is Indian, the pilot is Egyptian, the owner is Japanese, the operator is German, the insurer is English, the commission is Taiwanese,the cargo owner is Chinese, and the ship\'s nationality is Panamanian.Can you tell me who is responsible?

Forwarder and foreign trade people, are worried that they couldn’t laugh ! The sea freight increase is more than the gross profit of the goods, who is responsible for the burden? The customer has paid the full payment or deposit, and the contract is signed.

Please take a look at the shipping notice sent by our company to customers of the Red Sea line:

News from the shipping Company: Cosco - Due to the blockage of the Suez Canal, routes related to the Cosco Red Sea will be suspended;According to the latest plan, the Red Sea RES1 line will be suspended on April 5, April 12 and April 19. In addition, we need to clear the transhipment goods that have been loaded in the end of March, so we cannot accept the new booking of the Red Sea in April. Due to a large number of shipping stoppages, the cargoes loaded at the end of March and the beginning of April are expected to be delayed at the port for 2-5 weeks. Please be sure to inform the customer. In consideration of the suspension, customers who booked space but did not pick up containers during the period from January 1st to April 15th should stop carrying containers. Please advise them to leave.

YML- issued the notice of price increase, and the subsequent price is expected to be around US$2900, starting from 4.13; 4.9 is a European ship, which may not be able to be released on 9th. MD route is a European Mediterranean ship, so we’re not sure whether we can give Jeddah space.

It drizzles endless during the rainy season in Spring,

When asked where the space is,

the forwarder points to Suez.

Worry or not, foreign trade gold no longer.

Bitter or not, Asia-Europe route who call the shots?